One side benefit of our little project is all the cool words that I get to learn. Like "transom." I've heard Bill talk about them in the past, but for some reason, the definition doesn't seem to stick, perhaps because I am visually oriented. So, when he said, "Let's go talk about the transom," I said, "Uh, sure."

According to the Wikipedia entry that quotes the Efficient Windows Collaborative, "In architecture, a transom is the term given to a transverse horizontal structural beam or bar, or to the crosspiece separating a door or the like from a window above it, as opposed to a mullion which refers to a vertical structural member." Right. No wonder I'm having trouble with recall. Thanks a mullion for another new word!

So, here's our soon-to-be handsome transom, or at least where the transom will go, separating our living room from the office. At some point, we will find an old salvage window to install in this space to allow light to be shared between the two rooms via skylights and windows. Don't be concerned with the seriously out-of-plum framing. That is an artifact of taking a panoramic photo on its side, the only way to get a shot from floor to ceiling. That's just how we roll. 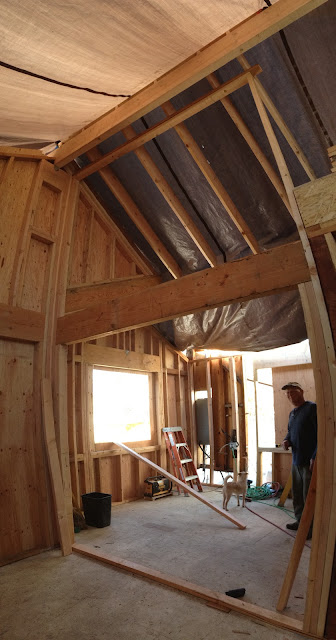 Posted by Annette Boyer and Bill Rankin at 11:06 AM