Answering the call of love

With all of the robocalls and fraudulent solicitations, who doesn't screen calls these days? When we used an answering machine, we would call home and leave a brief greeting, attempting to get the other's attention if they were available.

Most often, it was me calling as I left the office (when I worked further away from home than I do now) and I needed to give Bill enough time to reach the phone. So, I would give him an extended "Hey!" to allow him to get to the phone.

And, "Hey, doll..." came from the two lovely souls who married us. Throughout their lives, they referred to each other with that sweet greeting and we have carried it forward.

When we needed to clear out the recordings, we want to capture some of those brief moments, since these are far more important to us than grand gestures. Here are 41 of those greetings, just for fun.

Here's to the little things in life, the moments when you snort laugh or belly giggle.

Posted by Annette Boyer and Bill Rankin at 4:00 PM No comments:

Art you coming over?

One of our long-time motivators in getting projects done around our house is having guests over. Overnight guests get an extra few rounds of progress, but dinner guests get some benefits as well. Before last Thanksgiving (yes, I'm super behind with these blog posts!) Bill got all the cooking rolling and had a few extra minutes before we expected guests. So, he climbed up to hang a piece from his parents' home above their piano in our family room, a perfect spot.

The week before, he worked to hang our collection of fruit and vegetable labels from old San Jose canneries. These are originals (purchased on eBay, natch) that we framed ourselves many moons ago, and we have wanted them to grace our new kitchen for some time.

Posted by Annette Boyer and Bill Rankin at 2:29 PM No comments:

One of the types of things that we have had in storage but missed the most are our books, our own collections plus those of our parents. The house was designed with a study that overlooks the living room (behind Bill in the first photo) and one the projects he has most looked forward to is building the bookcases in the study. And, they are *done*! Next is the organizing and arranging of all that will go on all the pretty maple shelves.

Posted by Annette Boyer and Bill Rankin at 2:15 PM No comments:

Well, now. I'm a bit behind on all of the goodness that we have been adding to our house in the last few months. Some of what we have been doing is some Friday-night furniture shopping + supper out. That's hot date for us, buying a few new pieces after such a long but fun project.

Some of what we look for in new couches or chairs is the feel on our spines, an important checkpoint for two people who met in the chiropractor's office. Online shopping can take you only so far, so when buying a piece that will hold our bums, we've been visiting local stores for one room at a time.

We bought a love seat and chair + table for our front room, and we have already broken them in with Hank's help.
Posted by Annette Boyer and Bill Rankin at 2:06 PM No comments:

That time I sort of stalked an artist... 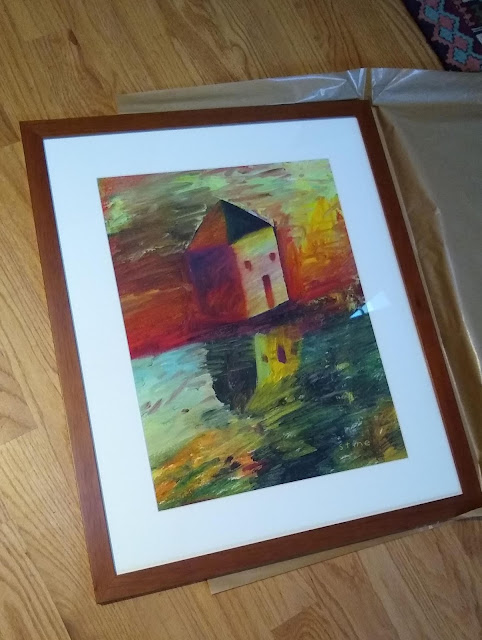 When I first moved to San Francisco, I used to admire the pen and ink drawings of Richard Stine that were published in the SF Chronicle. His art included equal parts of hope and frustration + quirkiness that resonated with me. I remember visiting his booth at an art fair in Sausalito and being truly in awe of his work. After Bill and I met, we continued together to love Stine's creative expression.

About ten years ago, I was planning a trip to the Seattle area to see a bunch of people including a friend who I have known since junior high. Or, as the kids call it today, middle school. I called her before the trip and said, "Uh, I want to go see an artist whose work I love. I asked if I could come to his studio on Bainbridge Island and he said yes." Silence on the phone. My friend has never been that person who talks easily to strangers, but it's easy for me. She couldn't believe what I was proposing and seemed a bit stunned as we boarded the ferry to go see him. Hell, yes, we're doing this.

He had two homes right next to each other. One was his home with his lovely wife, and one was his workspace. Richard left us in his studio to look at piles of artwork, including an unfinished book that told the story of a family member's journey with aging. It was funny, touching, sweet, just what I would expect from his work.

Since that visit, I have had my eye on one of Richard's paintings for our home, and we finally purchased a print of House By The River. Ever since we designed our home, we have been holding a special spot in reserve for this print. And, as another friend said recently, it's so appropriate that a vibrant image of a house is the first thing you see as you now enter our home.

Richard and I have kept in touch over the years and he now lives in New Zealand, one of our favorite places on earth. Perhaps we will have to visit (but not stalk) him there, too. :-)

Posted by Annette Boyer and Bill Rankin at 2:03 PM No comments: